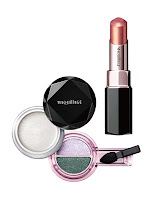 Maquillage will be teaming up with British designer-of-the-moment Christopher Kane for its Autumn '08 collection, "Mode Mix Maquillage!". The refined, futuristic-themed collection will launch on 21 July and include:

1. Lasting Climax Rouge in 12 shades, 6 of which are done in collaboration with Kane

A foundation case that is designed by Kane will be launched on 21 August in Japan. In addition to Maquillage's current 4 spokesmodels, British model Agyness Deyn will also be featured in the promotional campaign. Sounds exciting!
Posted by Haru at 7:13 pm