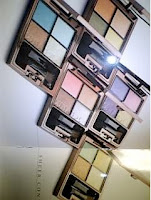 Pic of Lunasol's new Sheer Contrast Palettes from 2Channel! These will be released on 18 January in Japan!

I couldn't help but notice that the blue/brown palette is similar to Shiseido The Makeup's Eyeshadow Quad Shimmer Q2 Earth and Sky while the green/beige/orange quad looks similar to Shiseido's Eyeshadow Quad Shimmer Q3 Flora and Fauna. And the purple/pink quad looks similar to Shiseido's Eyeshadow Quad Shimmer Q1 except that the former has a yellow shade in place of the grey in the latter. That's surprising as I've always thought of Kanebo (which owns Lunasol) as the more innovative and creative company than Shiseido. But given how Kanebo has taken to copying Shiseido in other areas such as the marketing for Coffret D'Or, I guess this should not be that much of a surprise but it sure is a disappointment for consumers who look forward to something different each season from Lunasol rather than a rehash of a competitor's products and ideas.

The initial reviews on 2Channel of the Sheer Contrast Palettes noted that, as the name suggests, the eyeshadows have a light sheer, shimmery texture and the shades are easy to wear for Asian skintones.

I don't really feel attracted to the new palettes.... and being sheer isn't a good thing for an e/s in my opinion =P

Thanks for the preview! You always have the best scoops. Thanks for sharing! Cheers, Betsy

This sounds abit disappointing ... the palettes are rather pricey too. It's too bad they choose to follow in the footsteps of their competitors, oh well ..

from my point of view, imho,
i feel that kanebo is always 'copying' shiseido in terms of ideas and concepts.
shiseido seems to the forerunner and leaser still.
for instance, shiseido came up with MM first, which had the magical, dream-like and fantasty concept. while kanebo had kate, which tried to be edgy.. but did nothing in terms of its plain black pagakging. then, wham, kanebo in response came up with
Lavshuca, which had similiar curliques, princessy designs.

and of course there was testimo, and now coffet d'or to deal with maquillage. the advertising campigns of using 5(4) models are so similiar.

so it seems that kanebo always seems to be the poorer relation of shiseido. always in shiseido's shadow in terms of concepts and packaging and sometimes design.
thou, kanebo may not be as 'creative' as shiseido, it still has its strong points in terms of the quality of the product that it offers. gotta love the texture of the e/s and esp the l/s !!

p.s. i am liking lavshuca's christmas palettes, the texture is pretty and shimmery. and the packagaing is too cute and pretty to boot!

well, competition is healhty and hopefully can only benefit us

The only really creative brands under the Shiseido label, for me at least, is Majolica Majorca and Inoui ID. But Majolica Majorca is really hit and miss sometimes while Inoui ID has been discontinued. Shiseido The Makeup is much less attractive to me as a brand as it rarely introduces new innovations. For example, it has just been putting out different colour variations of its Silky Eyeshadow Quads for the past few years whereas Lunasol has been introducing new eyeshadow palette series every season, like Geminate Eyes, Sheer Contrast Eyes, Scent Form Eyes etc.