Kate will release a new Art Dial Mascara (1680yen) on 1 November in Japan. The mascara has an innovative dial-type design with a rubber comb applicator angled at 38.9° to better fit the curve of the eyes for easier application. The comb applicator's teeth are spaced 0.48mm apart, which is supposedly the ideal width for helping to separate the lashes.

The dial allows you to control the amount of mascara dispensed for either a more natural effect or a more dramatic effect as you desire. It also allows one to use up the entire tube of product properly, unlike conventional mascaras which become increasingly unusable as they dry up inside the tube. This sounds like a very unique concept, it'll be interesting to see how the mascara performs!

The mascara contains "volume free oil", a "stretch long polymer" for adding length, a "dry fix polymer" for a fast drying effect, and panthenol to nourish the lashes. It is smudge-resistant and removable with warm water. 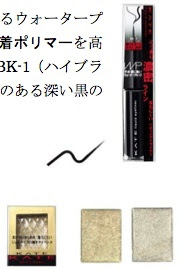 Looks very interesting! I need to go to Japan SOON!

Wow! That mascara looks so interesting; I am excited to see reviews in the future. On another note, I think that Japanese MU technologies are more advanced than American ones. I saw things on the Japanese market like foam hairdye and liquid eyebrow markers years before American brands offered them. Does anyone else notice the same thing?

Yeah i agree with the technologies lacking behind in America, not only MU technologies, as when i thought the world was using broadband, being introduced in Asia for 5 years and above then, US were still using dial connection to internet, only know about this when i was reading it from the papers but i've heard they are better now. They are also late in using text messages as well. In Asia, like Japan and Korea, their technologies stands out and always ahead but then again, it's not always a good thing though as some gadget are quite weird and ridiculous, esp. from Japan. But US never lack in fashion and new makeup style, they sort of set the trend, they are ahead but in different way. It's better this way rather than everyone compete on the same thing and level, it would have being boring!