I dropped by the Shu Uemura counter today to pick up the Mystifier eyeshadow duo (S$58). After swatching all three duos, I was initially tempted to get all of them as the shades all looked gorgeous with impressive colour pay-off and a very fine micro-shimmer. The cream texture was non-greasy and dried down fairly quickly.

But I eventually decided to get only Mystifier as it was the most unique duo for me from this collection and more likely to work well with my skintone than the purple or light olive shades in the other duos. When applied, the blackened emerald cream eyeshadow showed up as a smokey mysterious dark green with visible flashes of sparkle. I think it would make a great liner shade or used all over the lid for an intense smokey look. According to the Shu SA, the model in the ad visual is wearing the cream eyeshadow all over the upper lid and along the lower lashline with the golden powder eyeshadow applied on the middle of the upper lid. The powder eyeshadow in the duo is listed as Pressed Eye Shadow MF2 but my guess is that it is ME Gold 350, while ME Brown 850 is in the Mesmerizer duo and ME Brown 855 is in Tantalizer.

It is quite difficult to capture how the shades look like in real life but I gave it my best shot and tried to shoot it from various angles so that you can see the shimmer in the dark green shade. 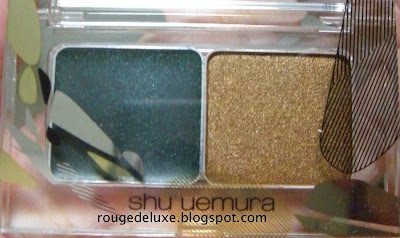 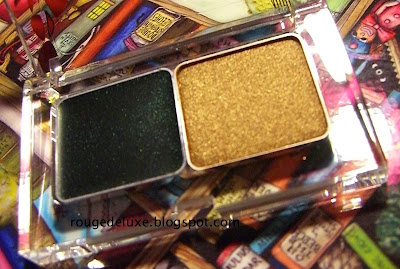 Hi Haru!
Actually I got these items (Mystifier and Mesmerizer) from my Seller in Taiwan and they are both gorgeous.
I did not had the courage to really use it, since they look so pretty in the pan. However, the metallic texture of the pwder part seems almost creamy.
The metallic shade in Mesmerizer at first looked a bit like like ME945, and I decided to tried in my hand. But no! It's so different! Actually is a metallic lavender, very, very pretty. I have nothing like it!.
They seem to be amazing and I hope to use them soon, when I stop looki g at them as 2 precious little gems!
Have a great day!
Andrea

I swatched the metallic shade in Mesmerizer and it came out much more silver on me than ME945 which has more brown. I remembered ME Brown 850 being very similar, which is why I'm guessing that's ME Brown 850 in the Mesmerizer duo. There's nothing like ME945 in Shu's current regular e/s lineup, which is a great pity as ME945 was an excellent shade.

Hi Haru:
You're right actually.
And it's a silvery purple shade as well. Nice, understated...
As for the one you have (dark green) I have tested it with the powder over it and it looks so cool, pretty much like the woman in the ad!
Know what I want to try? Using that green as a base for Shu's other green shadows. It will look good, I guess. Mixing them with the other powdery ones too... I think it will create some unexpected shades!
:)
Talk to you soon!
a.

my apology and correction to my previous post about the 3 powder eye shadow. I just saw the shu japan site and they were stated regular there. i don't know why we couldn't find them match here. maybe the samples aren't very fresh and the SA apparently didn't know much.