Jill Stuart introduced the Mix Compact Blush line in Fall 2007. At that time, five shades were introduced with #5 Pastel Peach being a limited edition (but it wasn't that fantastic so no big loss really that it's not in the permanent line). #6 Fresh Apricot was subsequently added to the line-up in Spring 2008. Then, as most readers of this blog would know, the Fall 2008 collection introduced two limited edition Mix Compact Blush Illuminance which promptly sold out at the counters everywhere. 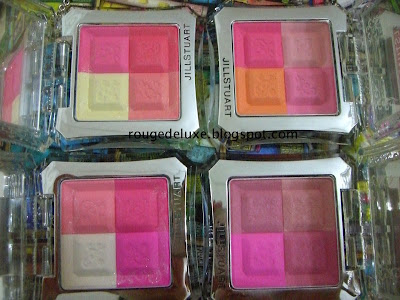 Each Mix Compact Blush contains 8g of product and retails for 4725yen (about US$44), which makes it pricier than brands such as NARS (3150yen, 4.5g) or MAC (3150yen, 6g) in Japan. However, the Mix Compact Blush are worth their price as you get a sleek dense brush (with goat bristles), decorated with a cute pink crystal, along with the blush compact.

When I first tried swatching the MCBs at the counters, I was underwhelmed by the seeming lack of pigment as I could not get the colors to show up on the back of my hand. But after investing in a MCB, I discovered that actually if you use the attached brush (which can be detached from the case), the color payoff is surprisingly good. With just a few strokes, you can build up a nice rosy flush of color. The brush is dense and feels slightly stiff but it is actually very good for what it's intended to do, namely creating a natural rosy blush of colour on the cheeks.

The MCBs in the regular range have a soft, matte texture and come in largely varying shades of pink, rose with some coral and peach tones thrown in, depending on which compact you pick. They have no visible shimmer or chunky glitter, which makes them easy to wear, especially for day/office. They apply sheer at first but can be easily built up for greater intensity with a few simple strokes. But the intensity is nowhere near that of NARS or MAC Mineralize Blushes. If you want more dramatic, shimmery blushes, I would recommend checking out NARS or MAC Mineralize Blushes instead, both of which have a more diverse range of color options (especially NARS). However, if you want a simple rosy doll-like flush of color that looks natural and sweet, then the MCBs are a good option for you. Personally, NARS is still my favourite brand for blushes due to the variety, intensity and lovely shimmer but I reach for Jill Stuart when I'm short of time and don't want to have to worry about my blush is too drama-mama or shining like a disco ball.

Currently, I have #2 Rose Bloom and #6 Fresh Apricot. #2 Rose Bloom applies as a dusky rosy pink while #6 Fresh Apricot actually turns out to still be more pink-toned on me, rather than apricot as the apricot shade is not that intense but rather acts to tone down the pinkness of the other shades. It does not impart any orangey tone at all when applied.

The MCB Illuminance are different from the regular MCBs as the white/pale yellow shade in the top left corner adds a noticeable glowy effect (but no chunky glitter) when mixed with the other shades in the compacts. But I actually prefer to use just the pink shades in the MCB Illuminance as it looks more natural. Applying the white shade on top can make the finish too frosty for my liking.

There is some silver shimmer sprayed onto the surface of the MCB Illuminance but it rubs off very quickly with the first couple of applications. #101 Platinum Illuminance is a blue-toned pink while #102 Gold Illuminance is a more rosy/peachy-toned pink. When applied, #102 is actually the more natural looking of the two although at first glance, #101 probably appeals to more ladies. But frankly, aside from the gorgeous packaging with the additional lace imprint, I find that the blush shades in the MCB Illuminance are not that unique and can be easily duped with the MCBs from the regular range. However, since they were limited edition, they were still a must-have for any Jill Stuart collector and would make a nice addition to any makeup collection. 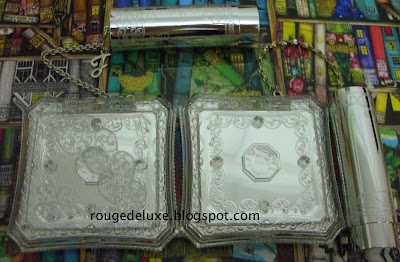 Hi Haru,
Thanks for the review on the blushes! Even though you say the LE colours are easily duped, I'm still choked that I wasn't able to get one. They were so pretty!

Could you recommend a good eye shadow primer? I have oily skin too and I like how the primer makes the colours pop, but it seems to make my shadow crease. =T

As for eyeshadow primer, Urban Decay Primer Potion is the gold standard for many ladies on MakeupAlley. I was using T'estimo Eye Bright Up Base for the past few years but this has been discontinued. Since then, I have been using a limited edition Ipsa cream eyeshadow and a Sweets Sweets primer but since both are unlikely to be easily accessible to you, I would recommend either trying UDPP or Lunasol Eyelid Base N (2940yen) which has an average rating of 5.2 stars on Cosme.net which is quite good).

Alternatively, there is also Jill Stuart Eye Jellies and Visee's Aqua Shining Eyes which can be used as eyeshadows on their own but I find that they make also good bases that do not crease. Hope that helps!