I just transited through Narita Airport Terminal 1 where there were numerous holiday collections already on sale. RMK, Lunasol, Cosme Decorte and Shu Uemura are all about 25% cheaper than the usual retail price in Japan. The RMK Christmas palette and brush set, as well as the entire Anna Sui holiday collection (including the set of three soaps) are already available while the Lunasol holiday coffret should be available starting 12 November. Shu Uemura did not have the Abracadabra Fantasy collection but they do have some exclusive travel products. Shiseido, Maquillage and Cle de Peau are also available but only about 5% cheaper than the usual retail price in Japan. 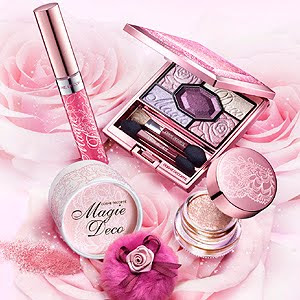 I was most surprised to find the Magie Deco holiday coffret set available. The rest of the Magie Deco makeup line is not available in the dutyfree but for some reason, they had the Magie Deco coffret. The coffret has already sold out at most Japanese department stores since its release on 1 November. The normal retail price is 6825yen in Japan but I purchased it at just 5900yen in the dutyfree. Most of the Cosme Decorte skincare line is available (but not the new AQMW line).

Est is also now available in the dutyfree with the eyeshadow quads retailing at 4400yen (versus the usual price of 5775yen).

These brands can be found in the perfumes and cosmetics store on the left hand side after immigration in Terminal 1.
Posted by Haru at 5:43 am

I wanted this set so bad. They have sold out of them now. Leaving me another option to buy the Lunasol holiday set instead.

Thank you so much for sharing this with us. Shame that place is so far away from where I am.

Did you get anything??

hi Lisa,
That's a pity. There were quite a number of sets on display at the airport too. The Lunasol set is quite different, more brown/beige themed. It also looks nice though.

I am incredibly jealous of the price you paid for the Magie Deco coffret! I don't regret ordering from Ichibankao though, as it's on its away, AND it sold out so fast! Have you tried it yet? I am hoping I like it :)

hey Justine,
I haven't tried it yet. The quad looks incredibly light and I'm a bit worried the shades will tend to be indistinguishable from one another when applied. I will post a look after I try it out, probably next week.

dear iris,
thank you for this post! may i know if e counters (especially est) are at arrival or departure hall? thank you

That is such a beautiful set and quite reasonably priced too. :-)
Glad to receive your post even though you're on holiday! :-D

hi,
The counters mentioned in this post are in the departure hall. When you arrive at Narita airport from overseas, there is no shopping at the dutyfree as you have to proceed straight to immigration/customs.

hi iris,
thanks for all your prompt replies that benefit all your readers! actually i really hope to get est stuff as it's my first trip to japan next month. i was hoping that i could get them once i arrive at dutyfree and buy the remaining which i can't get from the malls. may i check if u took a good look at the est counter at dutyfree? do u think i can get the eyeshadow palettes, especially the new releases, at e airport? cos if so, i will keep my moolah to spend during departure at the est counter. many thanks for your help, iris

hi,
I didn't take that close a look at the Est counter. I think they had virtually all of the eyeshadow quads on display though and the price was much cheaper than compared to the usual retail price in Japan. You can't buy them when you arrive at Narita, you can only buy them when you are departing Japan.

hi haru, were there many sets at narita? i`m looking for this set too but yet to come across a MD counter in tokyo

There were still a few sets left at the Narita Airport T1 dutyfree when I transited there this afternoon (Sat). I think the counters in Tokyo would have all sold out by now as the set was very popular.

Hi Haru, will it be cheaper to buy Lunasol in Japan?
How about between Taiwan and Japan?

hi Fion,
At the current S$/yen exchange rate, it is cheaper to buy in Singapore than Japan, with the exception being the Japan airport dutyfree areas where the Lunasol prices are about 20% cheaper than the normal retail price in Japan. For example, their eyeshadow quads are S$77 in Singapore while the normal retail price in Japan is 5250yen (about S$83). At Narita Airport dutyfree, the quads are 4250yen(about S$67).

I don't know the prices of Lunasol products in Taiwan and they are not listed on the Lunasol Taiwan website as well. In general, Japanese brands are cheaper in Taiwan than Singapore.