Coffret D'Or will release its Summer/Fall colour makeup collection on 16 June in Japan. The collection theme is "Beauty Curve" and the products are designed to enhance and accentuate the feminine facial curves such as those of the lips. 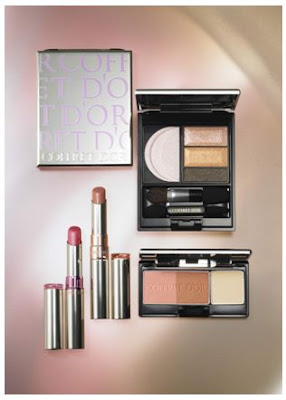 Hmmmm... I like the eyeshadow quad (I think they´ll have a few pretty colors so I´ll probably pick one up) but is it just me or does the compact look like it´s from Cosme Decorte?! I think it doesn´t seem as nice as the previous palettes! =(
The lippies look definitely nice though so I think I´ll pick up a few of these! =D
Thanks for posting!!

The eyeshadows lined in an semi arc is why it is reminiscent of Cosme Decorte's eyeshadow quads! I also feel that Coffret D'or lacks the pizazz nowadays. Its products such as the eyeshadows and lippies are still of the same quality, so I wonder if it is due to the lack of a very strong visual/marketing campaign that fails to bind the product to a particular image, which actually weakens the product and brand in our minds. It's like when you look at Lavshuca and you think of Puffy and eggplants, and contemporary stylishness when you look at Maquillage.

If you think about it, Maquillage is still producing the Eye Creator series and didn't change it much, the formula is pretty much the same, but you would still think Maquillage is not bad, it's still very fresh and you would want to grab a palette. But when you think of Coffret D'or now, the monotony of the eyeshadows instantly comes to mind, it's still the same formula/stale design.

hi Laura,
Both Coffret D'Or and Maquillage tend to be too mass market for my liking, such that the collections all start to look very predictable after some time even though they do have some pretty eyeshadow palettes from time to time. I'm quite fond of my Coffret D'or Colour Mixing Eyes #4 palette but whenever I see the press releases on their new collections, it's usually a snoozefest.