Read in Straits Times' Urban today that the extremely limited edition Dior Tailleur Bar set is available exclusively at the newly renovated Dior counter in Sephora Ion. There are only 80 units available, retailing at S$138 each. That's quite a bit cheaper than the 10,500yen I paid in Tokyo! Each set includes the Tailleur Bar eyeshadow compact and the Serum de Rouge #470, which is a new limited edition shade. 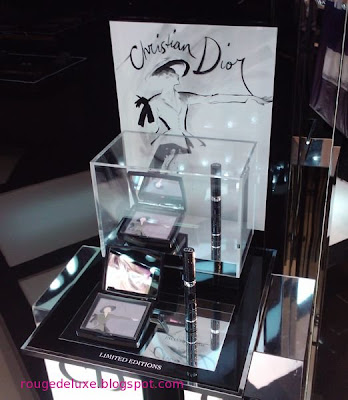 When I stopped by to pick up a set for a friend in Canada, the SA said that there were only a few sets left after the launch event yesterday. The Dior counter has been revamped to recreate the look of the backstage of a fashion show. It's by far the most glamorous Dior counter in town!
Posted by Haru at 7:17 pm

Oh wow! These are so nice! I really want one... like a LOT because I'm such a huge Dior fan. Too bad I dunno if they're going to be released in Canada and by now they're probably all sold out in Singapore =/

The palette is SO PRETTY. 80 is such a crazy small number too! Did Sg get the Love Dior face powder? I finally tracked it down at a Las Vegas boutique but was then told they couldn't mail it to me by air since there was nail polish... D: I wish the counters here (anywhere!) were that nice. The Dior counter in my Sephora is just an aisle, and they are pretty small otherwise :S

Not to mention as much as I adore the brand I hate most of their SA/MAs... they never seem to know what they're talking about! Hopefully that is different in Singapore :)

hey justine,
80 is not bad considering that in the UK, Selfridges got 150 units. I think Dior also has a very loyal fan base here, which is why the palette sold so fast.

Hey fuz,
It's surprising that the Tailleur Bar has not turned up somewhere in the US yet, as it's already made its way to Japan, UK and Singapore.

hi Sheila,
Yeah, this one is not going to stay on the shelves for long given the very limited number of units. But Dior comes up with new limited edition stuff all the time so I'm sure there's no lack of collectible items from them!

I was just looking at your last post, and the Serum de Rouge #s that you got with your palette in Japan are totally different! I wonder if the colours are actually different?

I can't tell if Dior has a huge fanbase in Canada - sometimes collections seem to sell out SUPER fast here (i.e. the summer displays were gone after only 2 weeks, and talking to an SA most of the line was sold out), but other products seem to linger (one of the Holiday 2008 quints - Twilight). But in general North America does not seem to get a lot of the 'exclusive' releases like this and the LOVE Dior palette - at least they don't get a lot of press! Maybe there isn't as much interest?

hi Justine,
I suspect #470 is the other shade that was available in Tokyo. It's quite close to the shade that I got (#560). #470 is a light peachy pink. I didn't swatch it but they showed me the tester in the store.

I don't recall the Love Dior palette being released in Singapore but that could be because they didn't publicise it widely and it was only available at one counter for a very limited time.

Hi Haru! Thanks for your post on the Dior Tailleur bar! I got myself 2 sets this morning! There were only 4 sets left when I was there. I got 2 sets; the 3rd set has some smudging which I did not want and there was a 4th set on reservation :) I'm a happy gal now! :)

Glad to hear that you manage to snag it! Yeah, I also asked the SA to let me see the palette before I purchased it and I did not like the first one she showed me as it had some flecks on the lady's dress. But the second one that the SA showed me was ok. Have fun with it! I still haven't used mine yet ;-p

Hi Haru,
Haha...I dont think I will ever start on it; it's too pretty to spoil the palette! By the way, is each set suppose to have a unique number ID? I did not see any such no. on mine. I saw the set you bought from Japan has a sketch on the inner side of the cover and there was the ID....

hi Lynn,
For some reason, the Dior counter at Sephora Ion keeps the paper inserts with the individual set numbers separately. I asked for it and the SA managed to locate it after hunting through the drawers. Each set is individually numbered. If you want it, you can try asking at the counter for it as they may still have some left as some customers did not want the inserts when they purchased the set.

o i see... I didnt realise the insert was not there until I got home. I think will have to make another trip to the counter tomorrow to ask for the insert. Thanks alot! :)