As much as I love Body Shop, I'm not a fan of their Body Butters which tend to leave a slightly greasy residue that sits on top of my skin instead of sinking in. Their Body Purees are lighter in texture but do not feel moisturising enough. Instead, I found the perfect balance in Bliss Blood Orange + White Pepper Body Butter. At S$49 for 250ml, it is much more expensive than the Body Shop's version but it does a much better job of leaving my skin soft and moisturised. It absorbs almost immediately without leaving any greasy or sticky feeling.

The soft blood orange aroma smells slightly sweet and citrusy without being too overpowering. I can't detect the white pepper note at all. There is also a Blood Orange & White Pepper Hand Cream but at S$15 for a 30ml tube, the Body Butter actually works out to be cheaper per ml. (Sephora currently has the Hand Cream on sale at two for $20). It is a pricey indulgence but it works so well that I'll definitely consider investing in another tube when I finish this one! 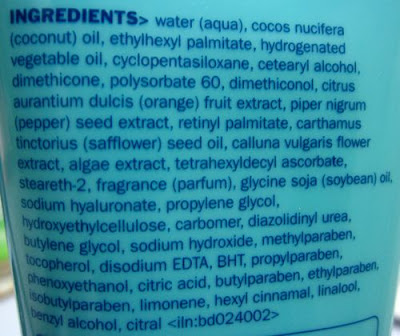 Aww, I actually tried the Bliss version first and found it not moisturizing enough, so I went to use the Body Shop's version instead. The bliss one smells really nice though! The body shop is kinda sticky, but it really helps to moisturize.

I hv the Lemon + Sage Body Butter.
Which version is more moisturising or popular?

Hi Su,
I don't think there's any difference in terms of moisturising power between the Lemon +Sage and the Blood Orange + White Pepper, the only difference is the scent. As for which is more popular, Lemon + Sage is supposed to have been Bliss' best-selling product for 10 years.