Here are some pics from 2Channel of ICONIQ from the new fall collection pamphlet for the Maquillage Rouge Enamel Glamour lipstick/lipgloss duos. These will be released on 21 July in Japan. 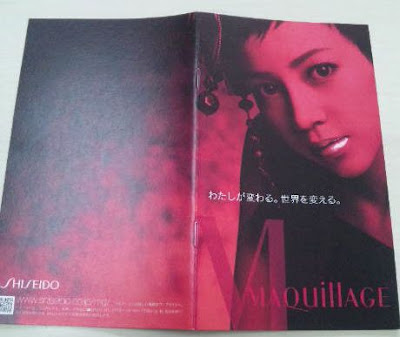 I wish they would bring back Ebihara Yuri, Juri Ueno or Anna Tsuchiya as the Maquillage spokesmodel. The ICONIQ visuals looks like something from a Chinese magazine from the 1980s whereas Ebihara, Juri and Tsuchiya had a much fresher and appealing vibe. 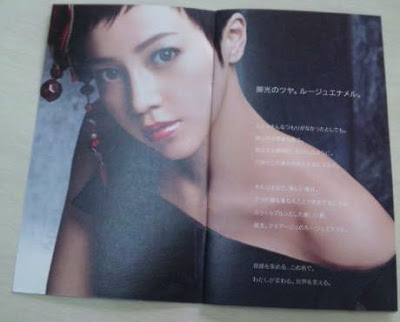 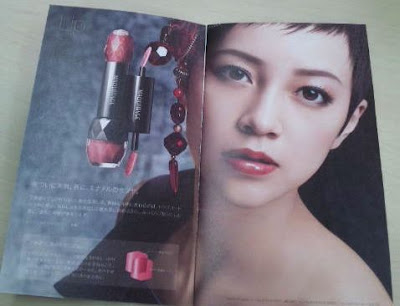 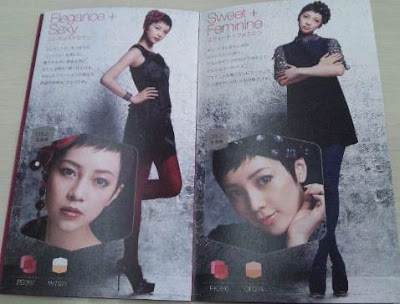 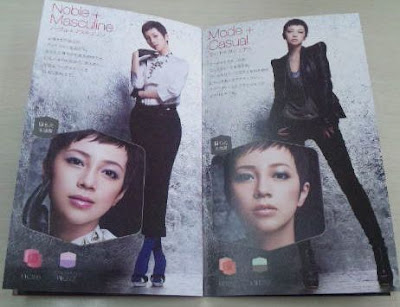 I am with you on the 80s magazine thing but it seems that Shiseido has signed a one year contract with Avex so they are stuck with Iconiq for the whole year (from what I have seen, people in Japan don't seem to like her all that much as well...)

hi Citrine,
1 year? That's horrible! Ugh... Nobody has anything positive to say about her on 2Channel too, although the posters on 2Channel tend to be very extreme and negative.

hi,
For ICONIQ, I think part of the reason is that she is of Korean descent and not Japanese, although she was born and raised in Japan. On 2Channel, there are many nasty comments about that.

oh..i thought have to do with her attitude or behaviour problem...seem like japanese people are strongly favored toward their own people than outsider? But nevertheless, she still look pretty and is born and raised in japan, the negative comment seem alittle uncalled for. And a serious look at her appearance after knowing of her korean descent, she doesn't really look like japanese nor korean...just somewhere in between.

It's too bad that Iconiq's face is not so unique...I will forget her face easily...
But a good manager can make some ordinary to be some celebrity, so we must bear with her for a year...it's a pity for Shiseido Maquillage.

It's actually quite sad for her because when she was in Korea, people didn't like her because she was "too Japanese." But now that she's trying to break into Japan, her Korean descent gets in the way. I actually prefer her cutie-pie image compared to her current one. In fact, I was a bit surprised when Shiseido signed her on.

But I do agree that previous Maquillage promo ads were nicer and more sophisticated, if I could say so. This one's stronger and bolder to match her image but for Maquillage? Hmmm. I thought this concept would go better with say, Kate.

A little to add, it's actually more about Iconiq's resume than her nationality (BoA is Korean but she is quite popular amony Japanese not to mention Shiseido has used two Chinese models Kelly Chan and Michelle Reis for their Peau Nu line in the past, which is like the basis for Maquillage)


Anyway, in her Avex profile page, nobody mentioned that Iconiq was actually a girl band member in Korea for the past few years. Instead, they said she has been studying abroad, specifically in US. It doesn't help that Iconiq has said something like “Of course I am Japanese..."in a Korean game show (It seems to have some negative connotation about the country).

So people (there was a press release video on Youtube but it was deleted as it was flooded with negative comments) has been calling her double faced, resume-faker (it's more like her agency's fault though) and the plastic surgery rumor didn't help much either...

It's kind of a gossip for people who are curious. I personally don't hate her but I certainly prefer the old line up.

Hey Citrine,
Thanks for the info, I didn't know about all that. It's a shame that the management company screwed things up for her like that.
I don't dislike her, I just prefer the previous Maquillage models and the ads that they did for Maquillage instead of ICONIQ's recent ones which seem to be more about promoting her songs.

Oops,I made a typo. Actually in the Korean quiz show, Iconiq (who was called Ahyoomi Lee back then)said "She is not Japanese, she is 100% Korean..."