Dior has re-released its cult favourite Cinq Couleurs Iridescent #539 Iridescent Leather! Spotted it at the Metro Paragon counter as part of the Extase Mascara display along with the new eyeshadow quints. This was first released as part of the Fall 2008 "Dandy Lady" collection and quickly garnered a huge following on Makeupalley where it became known by just the initials "IL" alone. 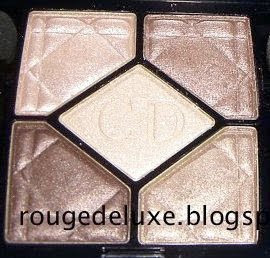 Simply put, it is an excellent combination of rich chocolate and pale beige beige tones that produces the perfect elegant, timeless classic look. This palette is also being re-released in February in Japan, but I'm not sure about other countries or whether it is still limited edition this time round but my advice would be to snap it up before it's gone again.
Posted by Haru at 8:49 pm

Oh, IL was my first Dior Quint and I love it... so much so that I actually have a back-up!! I doubt I need another one but I never want to run out of it... :)

i love IR texture but not so much for most of its combination so far. 539, however, is one of the few that i bought and actually cherish much and keep going back to use. when a person has a lot of makeup but still keeps going back to a same item, that says a lot about that particular thing. so yeah, this gets my vote for coming back as a re-release, which i normally don't agree as i prefer trying new stuff. they made this LE back then so many people were unhappy that they couldn't get one. now will be the time to rush to queue up then. i am so glad you post this and i have sent it to a friend who was looking for it high and low. you came to the rescue. hugs.

love your blog with all the latest updates and minus all the advertisements.

soooooo pretty!! do you know if this will be released in the U.S. as well?

Sorry, I don't know if it will be re-released in the US but I haven't seen any mention of it being re-released in the US on MakeupAlley where the members are usually very up to date. The best is to check directly with your local Dior counter. The Iridescent Leather was just quietly inserted into the display without any promotion or advertisement. If I hadn't known about it beforehand, I would have totally missed it too.

Hi jojoba,
539 was one of the first Dior quints I got as the raves on Makeupalley were just too persuasive :-) Hope your friend manages to snag it this time round.
I hate blog ads. Don't need them anyway!

hi justine,
I don't buy backups anymore as I hardly ever finish anything, much less a palette. The MAC Cork eyeshadow pan that I've been using as my brow powder every day for the past 9 years is still only showing half its pan. IL was my first Dior quint too, but I think I love the purple-themed ones more :-)

Hi I'm first time posting a comment here. Can I request a EOTD using Dior #539 Iridescent Leather? Having difficulty with the colors to work on me, but I think the problem lies with my skills :P

Have been following your blog for a while, very informative :) Nevertheness, thank you very much for your time & help.