Picked up the April issues of Spur (S$21) and Spring (S$15.50) today at Kinokuniya. Spur comes with a Rebecca Taylor retro floral print tote while Spring comes with a Jill Stuart tote bag. 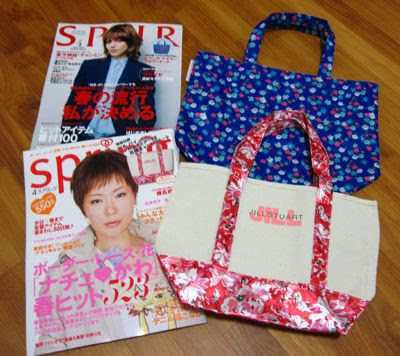 The Rebecca Taylor tote is slightly larger at 24.5x34x12cm and can fit the Spur magazine just nicely while the Jill Stuart tote measures 32x21x11cm and is a bit too small to hold the Spring magazine. 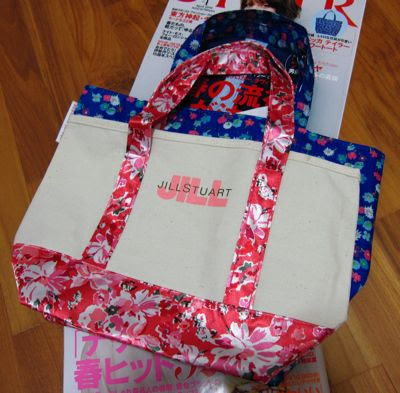 The Jill Stuart tote is made of a mix of cotton canvas and shiny polyester. 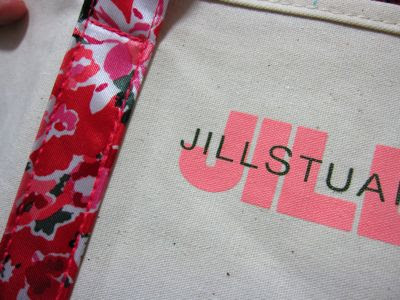 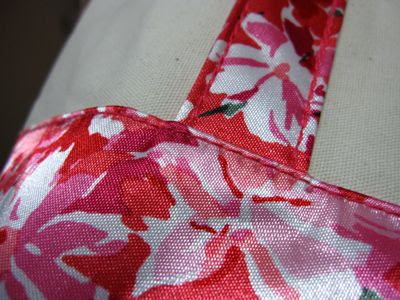 This tote is roomy enough to fit 3 or 4 drink bottles. 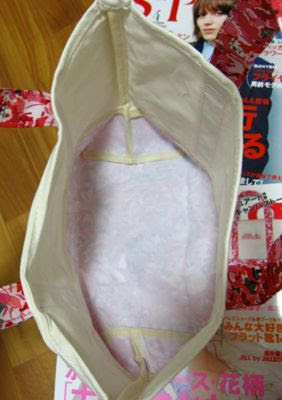 The Rebecca Taylor tote is made wholly of shiny polyester material and has no internal pockets. I think this bag print is cuter compared to the Jill Stuart. It's been quite awhile since any Japanese magazines had a Rebecca Taylor accessory item so I decided to splurge on this even though the mag is very pricey. 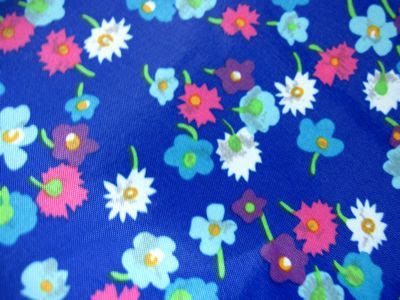 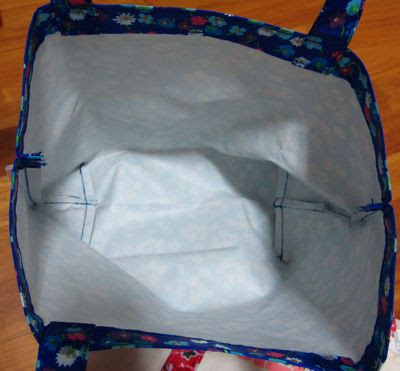 There were plenty of copies of both mags when I was at Kinokuniya (Ngee Ann City) this evening at 7pm+. You can get a 10% discount with the Kino membership card.
Posted by Haru at 8:58 pm

hi, i would like to ask you if want to buy the magazine how you get the freebies ?? at any Kinokuniya store in Singapore got sell?? march issues get what freebies ??

There are just too many magazines to list the individual freebies, plus I'm not sure which March issues are still in stock at Kino. So best to just go shop at Kino directly to see what's available.

You can see this earlier post for some of the current/upcoming freebies for Japanese mags.
http://rougedeluxe.blogspot.com/2010/02/japanese-magazines-gwps-preview.html

thank a lot, the Japanese counter is at the Kinokuniya store right or ???

i would like to buy a Japanese magazine with free a YSL tote bag , do you know on which month ?

The YSL bag came with the YSL mook (which means magazine book) that was released a couple of months ago and is already sold out at Kino.

okay, thanks . bugis got the japanese counter. so sorry to ask so much